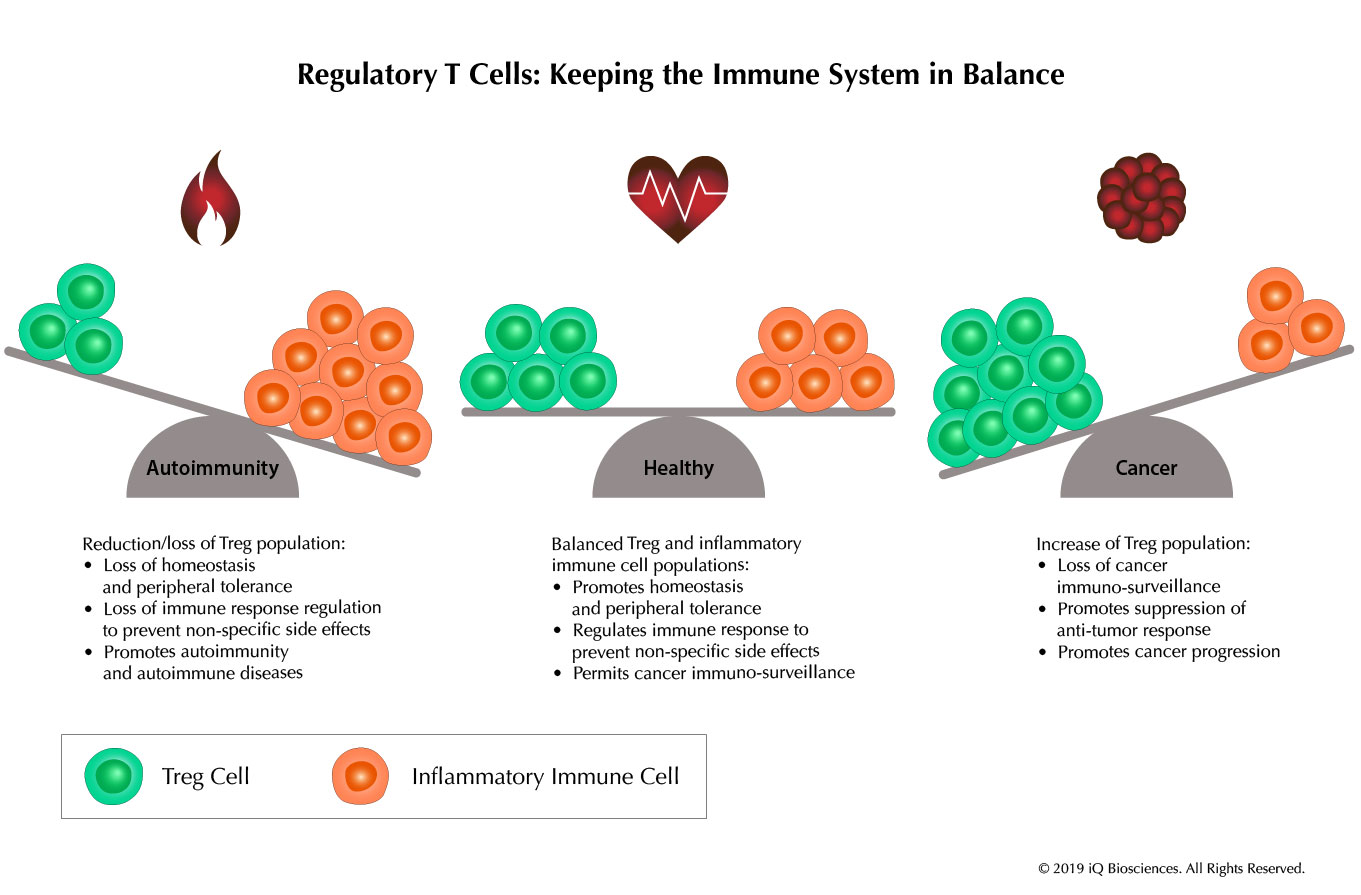 The Suppressive Nature of Tregs and Their Roles in Cancer & Diseases

In this blog, we’ll visit a group of regulatory cells called CD4 regulatory T cells, also known as “Tregs”, which maintain the balanced nature of the immune system. We’ll then discuss how their presence or absence can promote cancer or autoimmunity.

The immune response is an exquisitely controlled event in which lymphocytes expand, secrete cytokines, and kill infected cells in response to foreign pathogens.  At the peak of the immune response, extracellular organisms are eradicated through the humoral response, while intracellular pathogens are cleared by eliminating infected cells through the cellular response.  In both cases, the activated immune cells will continue to look for pathogens or infected cells after clearance unless their response is regulated and culled. Without this diminishment of the immune response, unwanted events, such as non-specific destruction of tissue and organs, may arise.  Therefore, the immune system has developed mechanisms to regulate the immune response by promoting activation-induced cell death, releasing regulatory cytokines, such as TGF-b and IL-10, and generating regulatory cells that can suppress the activity of immune cells to prevent these undesired events.

Similarly, auto-reactive lymphocytes are present in organisms, and immune homeostasis is required to prevent these cells from becoming activated and causing autoimmunity.  Part of promoting this homeostasis and maintaining tolerance is predicated by the presence of the regulatory cells. Therefore, regulatory cells are instrumental in controlling the balanced nature of the immune system to maintain a healthy organism. 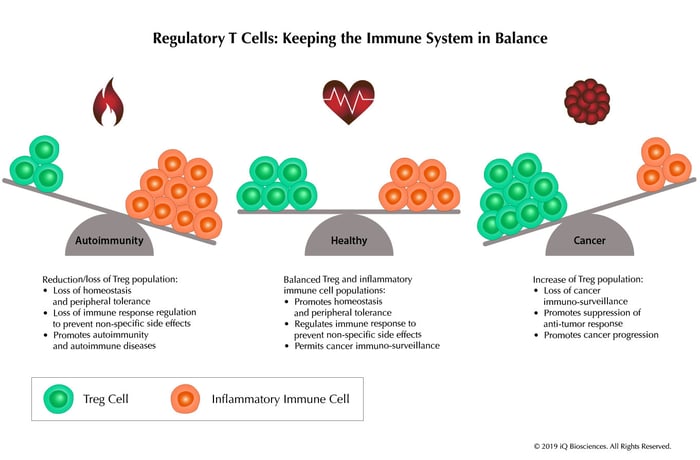 What Are the Different Flavors of CD4 Tregs?

The research community has spent a tremendous amount of effort to identify different types of Tregs. The most well-studied are the CD4 Tregs, which can be further distilled into more specific subtypes called natural Tregs (nTregs) and induced/adaptive Tregs (iTregs).

Like conventional CD4 cells, nTregs develop in the thymus through a T cell receptor (TCR)-driven process, along with requirements for IL-2 and co-stimulation.  In addition, FOXP3, a transcriptional regulator that belongs to the forkhead/winged-helix family of proteins, is required for nTreg development. Once the cells have gone through the development process, they exit the thymus to establish and maintain peripheral tolerance, which is a mechanism that prevents autoimmunity.

Conventional CD4 cells that have exited the thymus and patrol the periphery may also develop into Tregs under the control of FOXP3, whose expression is driven by cues from the tissue environment.  These “induced” regulatory T cells (iTregs) have been implicated in maintaining tolerance to food antigens and commensal bacteria in the gut and within tissues.

However, these iTregs may also come in a detrimental form.  There’s growing evidence that iTregs are found in the tumor microenvironment and function to suppress the anti-tumor response driven by inflammatory immune cells.

FOXP3, as mentioned briefly above, is thought to be the main driver of Treg development, which can be used to identify Tregs.

CD4 Tregs can also be identified through the presence or absence of a combination of surface proteins.  CD4 and CD25 (the IL-2 receptor) have been shown to be highly expressed on the surface of Tregs. Another marker is CD127, which is the IL-7 receptor.  Tregs express this marker at low levels in contrast to the high expression of CD4 and CD25. Finally, Tregs also resemble memory T cells, which express CD45RO and lack CD45RA.  Together, Tregs are generally characterized as CD4+CD25+CD45RO+CD45RA-FOXP3+CD127lo cells.

Many other markers are also expressed on Tregs.  However, these markers can be found on other T lymphocyte populations and are not commonly used to identify Tregs.  These markers include the checkpoint proteins LAG-3, CTLA-4, and PD-1, as well as the costimulatory molecule GITR.

Early studies examining the mechanism of suppression by Tregs showed interesting results. Tregs can function through cell-cell contact and the release of soluble factors. The exact proteins responsible for suppression by cell-cell contact were elucidated with the identification of checkpoint proteins and their presence on Tregs.  Indeed, CTLA-4 has been implicated as one of those checkpoint proteins expressed on Tregs.

Soluble factors released by Tregs include the cytokine IL-10 and extremely immunosuppressive factor TGF-b. Once activated, Tregs secrete these factors, which act to downregulate lymphocyte function. Furthermore, these cytokines have been shown to be required for development of iTregs. Therefore, they are not only potent suppressive agents, but also drive the development of Tregs in the periphery.

Finally, studies have also implicated Tregs to be “IL-2 sinks.” Because of its high expression on Tregs, CD25 may function to bind IL-2 and deplete the local environment of this cytokine to prevent binding to lymphocytes, which would otherwise promote an inflammatory response.

In humans, inactivating mutations in the FOXP3 gene leads to development of severe autoimmunity called IPEX syndrome (immune dysregulation, polyendocrinopathy, enteropathy, X-linked). This is due to a lack of functional nTregs as a result of inactivated FOXP3, which is required for their development, maintenance, and function.  Without the nTregs in the periphery, lymphocytes are activated and can function uncontrolled, which leads to severe tissue and organ destruction.

Studies have also implicated Tregs in a variety of autoimmune diseases, including type 1 diabetes, myasthenia gravis, systemic lupus erythematosus, multiple sclerosis, and rheumatoid arthritis. Thus, it is clear Tregs have a role in promoting homeostasis and tolerance, while preventing autoimmunity.

It is becoming increasingly evident that Tregs infiltrate the tumor environment.  This has been observed in a variety of tumors, including breast, liver, lung, ovary, gastric, and pancreatic cancer. More so, decreased ratios of CD8 effector T cells to infiltrating Tregs has been correlated with poor prognosis. Similarly, increased Treg infiltration was associated with decreased survival.

The presence of Tregs in the tumor serves to promote a suppressive microenvironment to inhibit the activation and function of pro-inflammatory cells, including T, B, and Natural Killer cells.  Therefore, it is not surprising to observe poor prognoses in patients that have Tregs in their tumors. Even more nefarious is the suggestion that CD4 T cells that enter the tumor to promote anti-tumor effects may be converted into suppressive Tregs due to the milieu.

The same CTLA-4 antibody mentioned above not only blocks the interaction between CTLA-4 and its ligand, but it can also target Tregs for antibody-dependent cellular cytotoxicity (ADCC).  With this mechanism, Tregs are depleted and eliminated in the tumor environment, which has been suggested through various studies.

A tremendous amount of effort has been put into understanding the biology and role of Tregs in human health and disease.  Their role is double-edged as they are required to prevent autoimmunity yet can promote cancer. With regards to cancer, a better understanding of Tregs has led to targeting them for anti-cancer therapies using different mechanisms.

With this increased interest in Tregs, iQ Biosciences has become a reliable source of human nTregs and iTregs with which to perform experiments.  These cells can be used in co-culture suppression assays with therapeutics that target the Tregs to determine if Treg-mediated suppression is lost or gained.  In addition, the Tregs can be used as target cells in ADCC assays to determine if therapeutics can specifically target Tregs for depletion.

iQ Biosciences also offers new Human Treg Suppression Assay kits that include all the required components to perform co-culture suppression assays in-house.  The Tregs included in the kits have been validated to have suppressive characteristics (Figure 1 and 2) so researchers can have confidence using these cells. Investigators simply need to follow the included protocol and add the therapeutic molecule they are assessing.

Both iQ’s Natural and Induced Regulatory T Cells, as well as the Treg Suppression Assay kits are now available on Quartzy!

Figure 1.  Human Tregs suppress proliferation of CD8 T cells.  PBMCs were labeled with CFSE and co-cultured at different ratios of Tregs in the presence or absence of stimulation.  After 4 days of co-culture, cells were stained with CD8 antibody and flow cytometric analysis was performed. (Left) Histograms of CFSE staining for unstimulated (gray) and stimulated (purple) CD8 T cells. Marker for proliferation is set based on unstimulated cells.  (Right) Histograms of CFSE staining for CD8 T cells co-cultured with different ratios of Tregs.

Figure 2.  Human Tregs suppress proliferation of CD8 T cells.  PBMCs were labeled with CFSE and co-cultured at different ratios of Tregs in the presence or absence of stimulation.  After 4 days of co-culture, cells were stained with CD8 antibody and flow cytometric analysis was performed. For analysis, dilution of CFSE was assessed on CD8 positive gate.  Marker for CFSE dilution was set using unstimulated cells. (Left, Right) Graphs show the percent of divided CD8 cells based on CFSE dilution analysis from 2 different donors. At lower responder:Treg ratio, more suppression is observed.

At iQ Biosciences, we provide focused research support to the pharmaceutical, biotechnology, and diagnostic industries in the form of intelligent research services and quality biospecimens. We are driven to go beyond being reliable – we excel at being a trusted partner in the biomedical community to help cure disease.